The Eastern Arborvitae [Thuja occidentalis] is originally from Eastern Canada and the Northeastern United States. In the middle of the 16th century this evergreen conifer was introduced to Europe. Thuja occidentalis belongs to the cypress family [Cupressaceae], which is primarily characterised by its scaly leaves. Nowadays, there is a large multiplicity in varieties of the Eastern Arborvitae. Most of them basically differ by habit and colour.

The tolerance in regard to exposure and soil conditions is wide. Sunny to partial shade with moist to wet but well-drained soils provide ideal conditions, as well as nutrient-rich planting substrates. Acid to moderately alkaline soils are suitable. 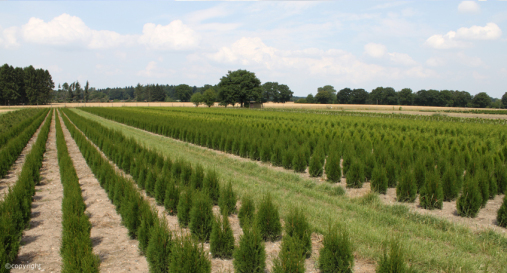 This Eastern Arborvitae is very robust and tolerates urban climates. With temperatures down to -26oC it is hardy in most European regions. Slight variations of this value may occur depending on local parameters as soil conditions or sun exposure.

For many native birds the Eastern Arborvitae serves as a nesting place and therefore enriches your garden.

Thuja occidentalis 'Dark Embers'® is not only a great choice for your garden caused by the attractive appearance. Its tolerance in regard to soils, sun exposure or pruning even allows to use this evergreen in many ways.